A downloadable Devlog for Windows

In this unreleased GameBoy game you take control of three classic fantasy heroes: an archer, a mage and a knight (totally not a cliche) to battle through infinite waves of monsters! 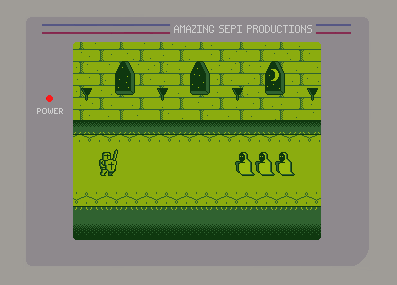 Challenge your reflexes to the limit! The gameplay may be simple: one button to attack and one button to change between the characters. But don't be fooled, this game is VERY hard.  Only real pro-gamers can take the challenge, the question is... are you a pro gamer or just another disgusting noob...

People are saying that if you reach 25k on hardmode you will achieve true happiness. Its probaply a myth, but are you willing to risk true happiness?

"An absolute masterpiece. The story was simple yet engaging. I instantly fell in love with all the characters" - Not a real gaming magazine - 2020.

"In five or six years, this game will be greater than Tetris" - Shigeru Miyamoto's evil twin brother - 1991.

"This game raised a whole generation of super intelligent monkeys. Without this game the alien/robot/clone wars would have resulted very differently" - Time traveling fat nerd - 2153.

He slashes through enemies with his mighty sword. He can only hit whats right next to him, but he cuts monsters like they are made of butter!

He can shoot fire balls bro! His attack is not as powerfull as the knights, but he can attack from a safe distance. "Lets just spam fireball and get this thig over with already"

He is the only one that can kill flying enemies and get the flying rewards. The whole team would be absolutely screwed without him, but he is completely vulnerable to evething right in front of his face though, so you have to take care of him.

Each one with a unique way of killing them. Can you figue them all out?

Only real gamers can unlock all of them, can you?

Composed by the amazing Leonardo Muller-Rodriguez you can check his work here:

That was a simple and fun little game.  This is how games should be.  I enjoyed it.  Thank you much.

Thank you, I'm glad you liked it!

Hey Sepi. I played more of your games, and recorded it on a video. I loved it. I would suggest you to make a similar game to this with music-rhythmic hits system. There is a game with a similar idea. The crypt of the Necrodance. I hope you like the video about your games.

Thanks for playing vlad, you are the best! Also that is your greatest thumbnail so far hahaha really funny!

Beautiful job! I loved the end result. The addition of trophies adds a lot to the game. It is a very fun and addicting game. It is perfect to play it a little bit every day before the game of the day. My congratulations and I will keep an eye on Sepi's new jobs. Keep it up man!

Thank you for your support!

Just played the second demo! I fared much better this time and got a score of 2720 (last demo I only got 200).

Gameplay is much more balanced this time around and I like the music during the main game. I can't remember if anything else changed, but in general the game feels more polished. Good job and thanks for the shoutout in the Credits!

Thank you for the support and advice!

This game is super fun, well done to sepi! :)

Thanks for liking the music!

Well, nice game! I like It! IT would be a bery nice little game on android!

Thank you! I'm glad you liked it!

The idea is to port it to android, that's why I made it using only two buttons (touch the left side of the screen to change character and the right side to attack) I thought It would look nice without having to put any buttons on the screen.

Nice demo. I kinda like the old school style of it. What is that power button for though? I thought it is something that I need to press. Maybe remove or make it distinguishable that it is not a button but purely for aesthetics? It would also be better if you made it seem like the character is moving and so is the background rather than the character standing still waiting for enemies to come. I can recommend you check out shuffle bag when it comes to RNG spawning. It helps you control the probability of objects you would like to spawn.

The power thingy its supposed to be an LED light lol. Nintendo Game Boy, Game Boy Pocket and Game Boy Color had it. It was there to tell you if the console was on, and depending of the intensity you could know if the  batteries were running low. They were weird times indeed, the console was released on 1989  and my grandfather had one (yes, my grandfather was a gamer!). I later had the gameboy pocket and it was my childhood! I really wouldn't like to remove it, but I will do it if its too confusing. Would it help if I try yo improve the "light" effect? I know why it may seem a button right now, its just a red circle :(

Im currently doing new enemies, and the next task will be making the spawners to keep improving the dificulty, so I will definitly check that shuffle bag thing. Where can I learn more about that? Im kind of a noob in the game-making thing.

Thanks a lot for playing and for the feedback! It really helps a lot!

Ahh. I see. Inspiration from the GBC. Nah, you can just keep it, just take note if other people will say the same if it will feel like a button. With regards to that shuffle bag, you can refer to this:

Thank you very much! I will check it out as soon as I finish the design of the new enemies.

Congrats on getting your first demo out!

Controls were nice and simple but I felt like the enemies came at you too quickly for just starting out -- I died about 2-3 times before killing my first enemy. Didn't encounter any flying enemies so the archer was kind of useless and slowed down cycling through my characters. Maybe have the first level just be one type of enemy so the player can gradually get accustomed to what character can fight what.

Tutorial and animations were good, and it definitely looks like a Gameboy game!

Thanks for playing!! It means a lot!!

Yes there is still a lot of balancing to do, but i wanted to have more enemies. For now the only flying "enemy" is the gold bag that gives the most points, but yeah, for now the archer is kind of useless :P

I will totally do mor of a progresive gameplay with one enemy at first and gradually introducing new ones.

Thanks a lot for the feedback! When the full game comes out you are definitly going in the credits :B 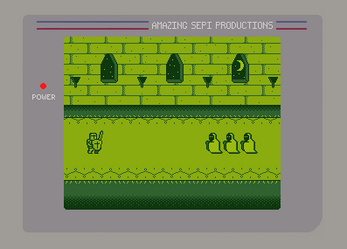